Mentoring, philantrophy, and a love of hockey passed between generations can become a powerful legacy.  Sterling 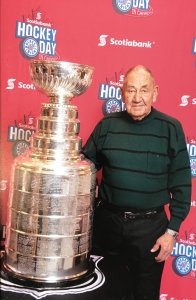 MacLeod, a chef at the Queen Elizabeth Hospital, had a passion for hockey.  In fact, he often stayed up late to watch double headers and could regularly be found watching two games at once.  Although he was an ardent Maple Leafs fan, he also supported local hockey teams too, becoming a season ticket holder in 1991.  As time went on, Charlottetown Islanders season tickets became the perfect Father’s Day & Birthday gifts

More than anything Sterling loved seeing kids at the Charlottetown Islanders games.  As someone who loved hockey and played himself, he was always looking for ways to get kids involved. Unfortunately, Sterling developed some health issues in the fall and was unable to attend games at the beginning of the season.  After he passed away, it was his wish that his tickets be used to introduce more kids to the game he loved.  Thanks to his generosity, a group of Bigs and Littles had the opportunity to see a game together before the season ended allowing people from two different generations to share the experience of going to a live hockey game.

Sterling shared his love of hockey with his son Kent…..although Kent became a Boston Bruins fan, which set up a white team versus black team dynamic in the house when he was growing up.  The MacLeods also shared Sterling’s love of helping kids.  Kent and his wife Tammy have been huge supporters of Big Brothers Big Sisters!  For the last 8 years, Discover Kia has been a Bowl for Kids Sake sponsor and has actively participated with fundraising teams too.  Kent’s wife Tammy was a Big Sister, and even though her Little Sister Amanda has a child of her own, they try to get together for lunch when they can.  Tammy is a strong advocate for mentoring and promotes bein

g a Big through word of mouth.

We usually talk about the effects of mentoring within the formal setting of our programs, but mentoring can happen anywhere, and the mentoring that happens within families can be a powerful thing.  A love of hockey and helping kids shared by generations of one family has lead to the opportunity for more kids in our communities to try new things.  We want to thank Sterling, Kent, and Tammy for championing opportunities for kids!

Register for Launch Your Life!

Celebrate the Holiday Season by Giving Back.

Register for Launch Your Life! Post-Secondary!

Join us for The Big Little Challenge!

Celebrate the Holiday Season by Giving Back!

Save the Date – The Big Little Challenge is coming in March!

A poinsettia from VanKampens Greenhouses could spark potential this Christmas!

Take a Photographic Tour of the Dream Cottage!

Planting flowers in our Adopt-a-Corner Garden is the perfect way to spend an afternoon!

$7500 Early Bird Prize Winner & What’s Next at the Dream Cottage!

The Dream Cottage is open. Up first: the $7500 Early Bird Prize

Check Out What’s Happening at the Dream Cottage & Pre-Order Your Tickets!

Give your Mother a Dream Cottage ticket this Mother’s Day….just like you normally do

WestJet Gift-of-Flight Winner & What’s Up Next

Our Cottage Living Dream Cottage Early Bird Prize Winners and What’s Up Next!

Our $7500 Dream Cottage Early Bird Winner and what’s up next!

How to Sign Up for and Use On-Line Fundraising

There were more than 50 Dream Cottage Prize Winners This Year

Over 4,000 kids on Big Brothers Big Sisters waitlist in Canada